​I'm not yet sure what I want to do with my concrete shoes, so I need to think about that further. We didn't cast them with tubes to make them into stands, as it was too complicated, but apparently it should be possible to drill holes for a fixing like that. That could be interesting, but is it too similar to using my cast feet? As objects in their own rights they're interesting, I think, but I wonder whether I might just use actual shoes in my work instead? What does the fact that they're concrete bring to my work? Again, I need to think more about that.

I still see concrete as an intriguing material to work with, so I definitely want to pursue its use further.... Maybe using more abstract cast forms, like the stands I made for my Nobodies series?

Also, they're my shoes, and my shoes are very quirky. How important is that? If they were more generic shoes, I wouldn't find them as interesting, but maybe other people would relate to them differently. I do have a very large selection of shoes and they are an important part of my identity. Rather embarrassingly, maybe, I still have shoes that I no longer wear but that I haven't been able to part with. This pair is one such treasure. I think I have some kind of attachment disorder -to my shoes and clothes! I'm sure it's because they have been part of me. ​

It does make me think again about the significance of significance. For my Undergrad dissertation, Second skin, I researched the very different ways that Louise Bourgeois and Christian Boltanski used second hand clothing in their work. Bourgeois used a selection of her own carefully treasured clothes; Boltanski used tonnes of anonymous clothing from a textile waste company.  In my work, I've used my son's clothes ( Nobody 1) and my family's clothes (Don't wash your dirty laundry in public) but I've been really reluctant to use my own clothes, for some reason! I think I'm saving them for a special moment when I can make them into a work of art. (And yes, I'm saving them!) I do also have bags of anonymous clothing and shoes from friends. I think I would find it easier to work with them as they don't have memory attached to them.

Casting these shoes has probably destroyed them, but it has also elevated them, in a way. They're probably going to last much longer than the actual shoes would have done. And can I now recycle the original shoes? I haven't yet, but it's an interesting idea that immortalising my shoes by casting them in concrete frees me to let the treasured object go. I'm now imagining casting all my treasured possessions in concrete and disposing of the originals! What an installation that would be.

Who else uses shoes in their art?

There's something about shoes that definitely has associations with body. Empty shoes can definitely lead to feelings of absence. The ways that a shoe wears are distinctive to the wearer, so that can also add feelings of nostalgia and loss. 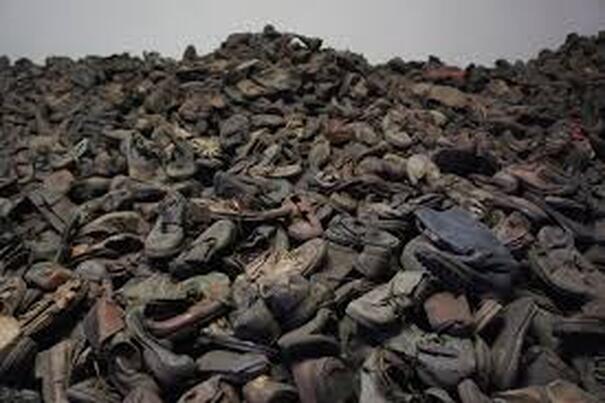 A pile of shoes from Auschwitz
Images of piles of shoes from the holocaust, for example, are an extreme example of these feelings of abjection and loss. They remind me of Boltanski's installation, Personnes, 2010. It feature enormous piles of used clothing set out in a grid in a cavernous space. 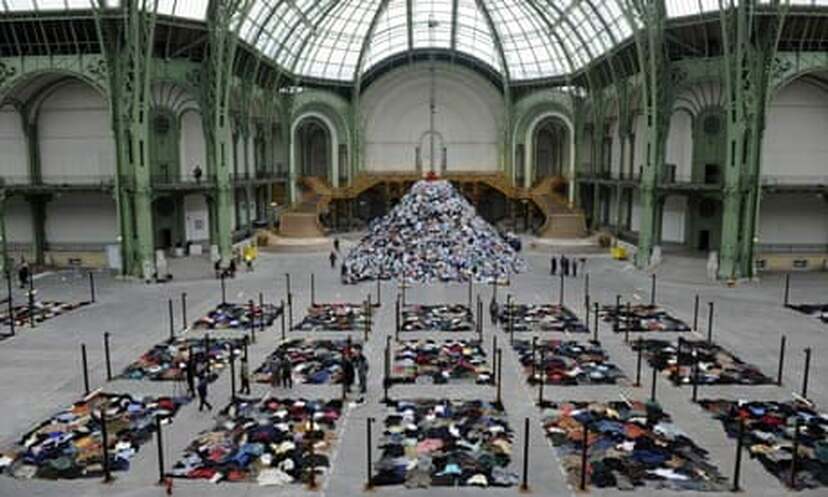 Christian Boltanski, Personnes, 2010,
​Grand Palais, Paris
Used clothing, lights, mechanical claw
'Much of Boltanski’s work ... deals with a universal, fabricated memory. He maintains ‘Part of my work…has been about trying to preserve… memory …memories are very fragile; I wanted to save them’ (in Garb 1997: 19).[i][i] Boltanski often uses found objects, like clothing or photos, of which he says ‘(it) is an object, and its relationship with the subject is lost. It also has a relationship with death’ (in Garb 1997:25).' (Baker, 2014, p7)
Louise Bourgeois, on the other hand, chose a few choice personal garments to incorporate into her work. From my dissertation again:

'The memories that Bourgeois’ work evokes are very personal. She asserts, ‘A garment is...an exercise in memory. It makes me explore the past’ (Bourgeois in Herkenhoff, 1997: 260). In Pink Days and Blue Days (Fig. 1), she has selected ‘her own carefully preserved clothes’ that she has compulsively stored since her childhood, ‘lifeless relics that are nevertheless imbued with a lifetime’s emotions’, to ‘reconstruct the past’ (Bernadac 2006: 154; Hauser and Wirth 2013; Gorovoy 2013).[i] Of Pink Days and Blue Days (Fig. 1), magazine editor Ingrid Sischy says, ‘Even if you don't know those memories, you see the pieces and they evoke so much. They're emotional and physical’ (date unknown).' (Baker, 2014, p7)
​ 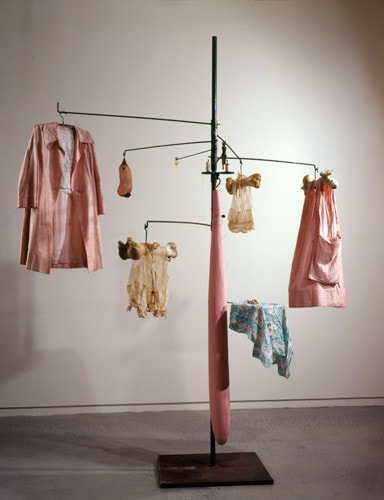 Louise Bourgeois, Pink days and blue days,
used clothing, bones, hangers, metal
So, how important is it to me that my work is based on my body, my shoes, my clothes? I would say that it's extremely important, but I do think that I'm attempting to not just focus of me but also find commonalities and connections between my experience of living in my body and other people's experiences of their lives in their bodies.

I'm going to reread my dissertation next and follow up some of the areas of research in that.
Baker, L. (2014) Second skin: used clothing and representations of the body in the work of Louise Bourgeois and Christian Boltanski, unpublished undergraduate dissertation Available at: https://www.academia.edu/32294698/Second_skin_used_clothing_and_representations_of_the_body_in_the_work_of_Louise_Bourgeois_and_Christian_Boltanski (Accessed:10 November 2020)