LOU BAKER MA FINE ART RESEARCH 2019 - 2021
3.12.20 It begins; reflections on provocation in my practice
I think I first realised just how provocative my work was when I was awarded the Embroiderers' Guild Scholarship and exhibited at the Knitting and Stitching Shows in London and Harrogate, just after I graduated in 2015. Admittedly, exhibiting my life sized, abject, stitched, hanging The Others, Nobody 1 and All the babies I might have had 2 in the textile art galleries of a rather niche trade show I should have expected a range of responses! The audience is predominantly knitters and stitchers, as the title of the show suggests, predominantly older female, many of whom are not necessarily interested in art. I was expected to be with my work for each exhibition, so I spent 9 days in total having fabulous conversations with all sorts of people. I soon decided that if I just sat and knitted, and didn't engage, I would miss a very valuable opportunity. So I set out to ask people what they thought about my work and asked if I could write down their comments. In fact, I see it as my unintentional introduction to social engagement as well. I have documented the experience in 'Do you mind if I write that down?' 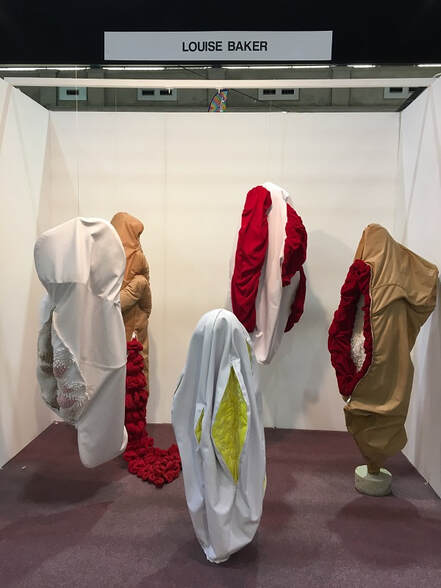 Lou Baker, 2015, The Others: a self portrait, installed at The Knitting and Stitching Show, Alexandra Palace, London, October
I was delighted and astonished that my work provoked such a range of conflicting responses
- attraction ( many people wanted to touch my sculptures. One person put her head into one of the orifices.)
- repulsion. People would come up to touch my work and then abruptly change their minds and physically recoil.
- horror. Many people were shocked and horrified by what they saw.
- hilarity.... and many people laughed out loud!
- tears. A couple of people cried as we talked... and I cried with them ( We were talking about infertility as 2 of the sculptures embody something of my own experience)
- hugs. Lots of shared experiences and solidarity
-incomprehension. Some people couldn't understand why I would make things that were not functional, perfect, decorative etc, all the normal stereotypes of work with stitch.
- curiosity. So many people wanted to know about my work and what it was about, how and why I made it
-delighted. Some people were so pleased to see unexpected, dark work, Fine Art, in that setting. 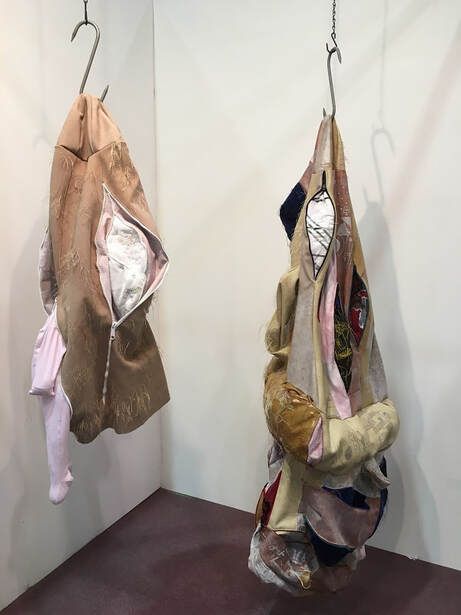 Left to right:  All the babies I might have had 1, 2015, and All the babies I might have had 2, 2014,
​installed at The Knitting and Stitching Show, Alexandra Palace, London, October
As I think about it all now, I realise that my sculptures were in Mary Douglas' terms, 'matter out of place' and that is probably the main reason that they caused such a stir. The fact that some of my sculptures looked like giant genitalia might have been another reason though, and maybe that some were suspended from chains by meat hooks? Also, not only did I invite feedback, I also encouraged people to give more by validating it by asking if I could write it down.

​My work definitely sits more comfortably in a Fine Art rather than a Textile Art setting.

Whatever the reasons for the amazing range of conflicting responses, I was hooked. I realised that I wanted to find ways to amplify this effect if possible in my future work....​