Watch - An interview with  Candice Breitz - How Mainstream Culture Shapes Us

Find - Locate an artwork that is an adaptation of a previous artwork ( any period of time ) and bring two images to the seminar
Emma and Clueless
Clueless (1995) is an adaptation of Jane Austen's novel, Emma, which is set in The States in the 90s. It's the story of a privileged, white 16 year old, Cher, who likes to control those around her to her own advantage. It's very light weight, heartwarming, and sits easily within the genre of American High School comedic dramas of that era. The most striking thing about it, I think, are the clothes. It's almost as if its a costume drama for the 1990s. And apparently they have influenced fashion since then. Have a look here for some of the wonderful outfits. It's interesting to see that they're still influential; when I Googled ' Clueless outfits' many of the articles were from 2020 (Goosby, 2020).

Emma (2020) is the most recent adaptation of the classic tale. I hadn't seen it, so I was very glad to watch it. It's much more like a traditional period drama but with some 21st century elements. Emma behaves much more like a contemporary teenager than a young woman from the early 19th century - her turn of phrase, her facial expressions etc. I thought that the cinematography was charming, and it was infused with contemporary colour, in the costumes but also in the interiors.

I thoroughly enjoyed watching the two films in quick succession. I was interetsed in the way that they both played with the same story in different ways. The 19th c story came alive in Clueless, but also in Emma, reverting to the classic period drama 5 years later.

Emma also reminded me of Bridgerton. Bright, contemporary - romantic escapism! Perfect for a pandemic.
Goosby, K (2020) 24 Best "Clueless" Outfits That'll Make You Wish You Were Back In The '90s Available at: https://www.seventeen.com/fashion/g28722009/best-clueless-costumes/ (Accessed 7 February 2021)
Candice Breitz - How mainstream culture shapes us
This is an interview with Breitz about her work. She talks about two bodies of work:She discusses how we are influenced by popular culture.
It's very powerful and poignant. I have written more about her work here.

It is an interesting thought. Do we become what we consume? The current Western culture is saturated with moving image, stills and text; social media is very powerful. Are there ways that I can use this in my work? More to think about...
Adaptation or appropriation?
Sherrie Levine 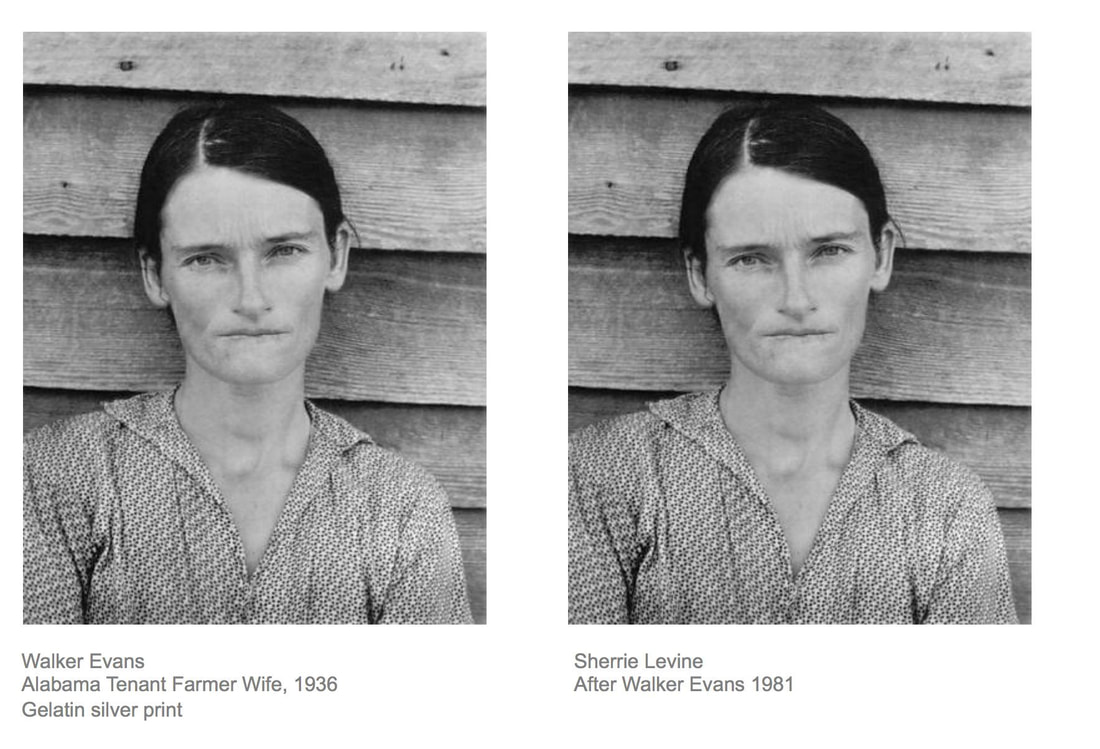 Sherrie Levine
«After Walker Evans»
'Sherrie Levine After Walker Evans» was the title of a 1981 exhibition shown in New York at the newly opened Metro Pictures Gallery. On display was a series of famous Walker Evans photographs which Levine photographed directly from an exhibition catalogue. Although the Evans photograph of the corner of a modest wooden shack and the portrait of a downtrodden farmer were meanwhile handled as icons of art photography, they were no longer subject to copyright laws: in her selection of Evans’ already-released photographs, taken in the 1930s for the Farm Security Administration (F.S.A.), Levine refers to a federal installation of the Roosevelt era for improving the living conditions of impoverished tenant farmers in the American South. Levine’s gesture of reproduction lets itself be interpreted in a variety of ways: it represents a gesture of appropriation and at the same time dismisses every creative act. By exhibiting the rephotographed Evans photographs in an art gallery, she quotes the museum-related status of photography, which since the 1970s enthroned documentary and scientific photography as well, and in doing so makes this process visible. In the end, she also makes current the themes of Evans’ photography (one can establish a reference to the effects of Reagan’s politics on the lower classes of society). Unlike with Richard Prince, whose rephotographs of advertising imagery divert one’s gaze towards everyday ‹visual culture› and reevaluates it, Levine reflects the mechanism of the art system, built around expressions such as authorship and originality, and questions this.

Yet the paradoxes of this system have also overtaken Levine’s works: while the photographs in question by Walker Evans can be copied and reproduced, the rephotographs by Levine are protected by copyright. The website http://www.AfterSherrieLevine.com/, created by the artist Michael Mandiberg, develops this problem as a central theme and shows here the photographs used by Levine..' (Medien Kunst Netz, no date)
Jeff Koons

Left: Art Rogers, Puppies, 1985.  Right: Jeff Koons, String of Puppies, 1988. Polychrome on wood.
'In October, 1989, when Rogers filed suit against both Koons and his principal gallery, the Sonnabend Gallery. He sought at least $375,000 in compensatory damages, and $2.5 million in punitive damages. Unfortunately Jeff koons had ignored the copyright notice on the postcard that he copied. Additionally, there was proof that he didn’t merely want to appropriate the photograph but to copy it, as per his instructions to the craftsmen who were constructing the works he specifically instructed them to do the work based exactly on the photograph. He also asked his craftsmen to exaggerate certain aspects of the puppies characteristics such as their noses in order to create something found between real life and animation. Koons’ defense was that the Rogers note card represented an accurate depiction for the couple and their puppies. He argued that he merely borrowed information from the work and not any expression. Koons sold the allegedly infringing works for $375,000. Art Rogers every incentive to pursue the issue to trial, it also made Koons a wonderfully inviting target.
​
On December 10, 1990, Judge Charles Haight of the federal District Court in Manhattan granted summary judgment to the plaintiff. The judge denied Koons’ claims of fair use. Koons was ordered to turn over all “infringing materials,” including a fourth edition of the sculpture, an artist’s proof.' (Copyright Visual Arts, 2011) 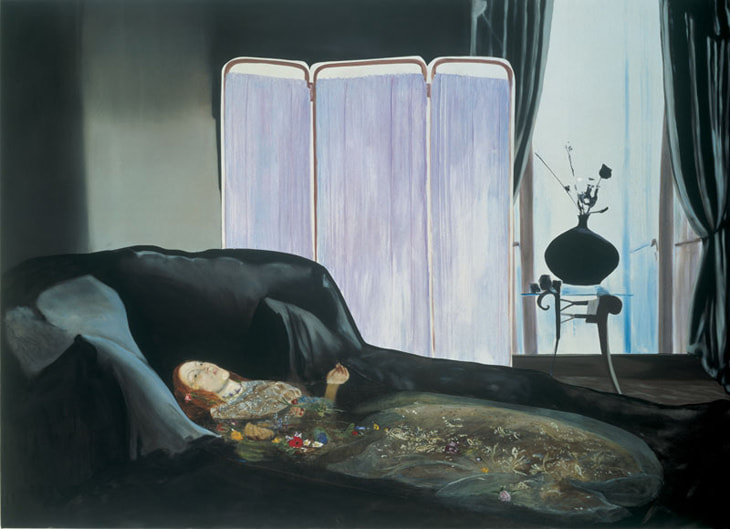 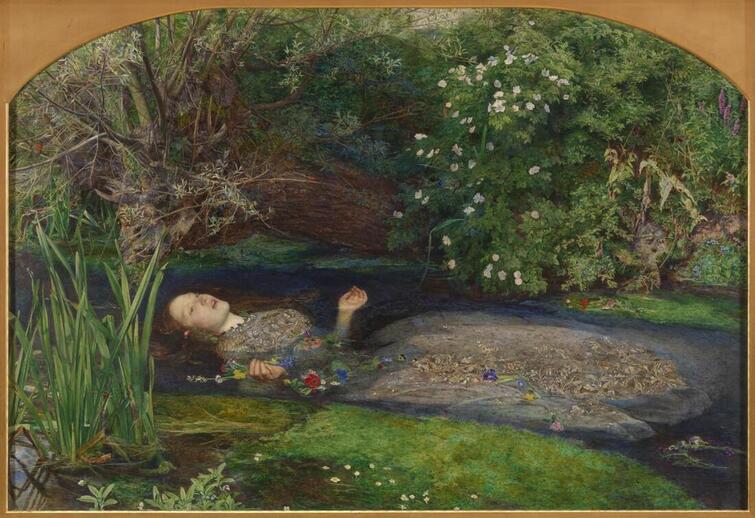