LOU BAKER MA FINE ART RESEARCH 2019 - 2021
Invisible, a collaboration with Hannah Fry
Inspired by a book I read as a child about a little girl who wore clothes that camouflaged her with her environment, I made a stitched soft sculpture out of canvas and wore it for a photo shoot against a backdrop of the same material. I then posted the sculpture, with the backdrop, to Hannah in Bath. She will paint both the backdrop and the sculpture and take photos of herself, camouflaged.
When I posted images of me wearing the sculpture on social media, I was very pleased to have a range of conflicting responses; associations with Abu Ghraib, Ku Klux Klan, angels and snow angels. My work often has a dark side.

​The shadows in these images by the washing line are very effective in camouflaging the soft sculpture.
The idea for the collaboration came about in the studio, before lock down, when I noticed that the jumper that Hannah was wearing had visual similarities to one of her paintings behind her. And so the idea was born. It took me a couple of weeks in isolation to be able to focus on new work, but we decided to go ahead and make it a postal collaboration. The restrictions of lock down inevitably mean that arranging photo shoots and working on it together in the same space have been impossible, but it does bring new meaning to my idea of invisibility. There is a sense in which this ongoing isolation makes us become more invisible. Am I merging with my environment?

I plan to develop this idea further, maybe by using old duvet covers - one side to make the sculpture, the other as the background. I think that with Roszika Parker's theories of the gendered associations with stitch and the domestic environment, using bedding will bring further poignant meaning. The associations of bedding with comfort and the body are clear. I've also contacted a dance choreographer who is keen to collaborate if I send her my duvet sculptures when they are made.

For this initial sculpture, I used canvas, the fabric normally associated with a flat, stretched surface for painting. I'm interested in the ways that painting can be subverted by deconstructing the stereotype and blurring the divide between painting and sculpture. Other artists I've researched who deconstruct paintings in various ways include Sam Gilliam, Jacqui Hallum and Bath Spa MA Fine Art alumna, Ally McGinn. For further details of research and development, see the bottom of this page.

This sculpture joins my Living sculptures series. These are wearable soft sculptures which are part of an ongoing participatory project examining the links between my two main processes - knitting and stitch - and the associations with garment, body and consequently identity. In 'normal' circumstances I invite my audience to not only touch but to wear them, and become a living sculpture. The passive viewer becomes an active participant. The first series of Living sculptures, made in 2018, are hand knitted and garment-like, but with a twist. The second series , the Prison series, 2019, was made specifically for the B-Wing exhibition in response to Shepton Mallet Prison. These are much darker, based on the traces- both physical and psychological- left behind by the multitude of people incarcerated there over the years. Their presence is palpable.

At the moment, I can't invite others to wear it,sadly. (I did suggest that my partner wore it, while I took the photos, but he wasn't keen for some reason!) It has changed the way I made it, and the way I relate to it.  Knowing that I would also be posting it to Hannah, with no fixed time that I would see it again, 'in the flesh', made it different again.

And there is a change in control. Now Hannah will photograph it, in her isolation, possibly exclusively as a series of selfies in her mirror, in her solitary isolation. Then, in her own time she'll paint it and wear it again in front of the painted backdrop. We've agreed that she can do whatever she wants with it, so there's a sense of anticipation. It's now beyond my control. It's a connector, but it also amplifies our isolation, mirroring our separation. It's definitely not the same as working side by side in a studio!
22.4.20 I set up a makeshift photo studio - the rotating washing line in my garden and a couple of pegs! 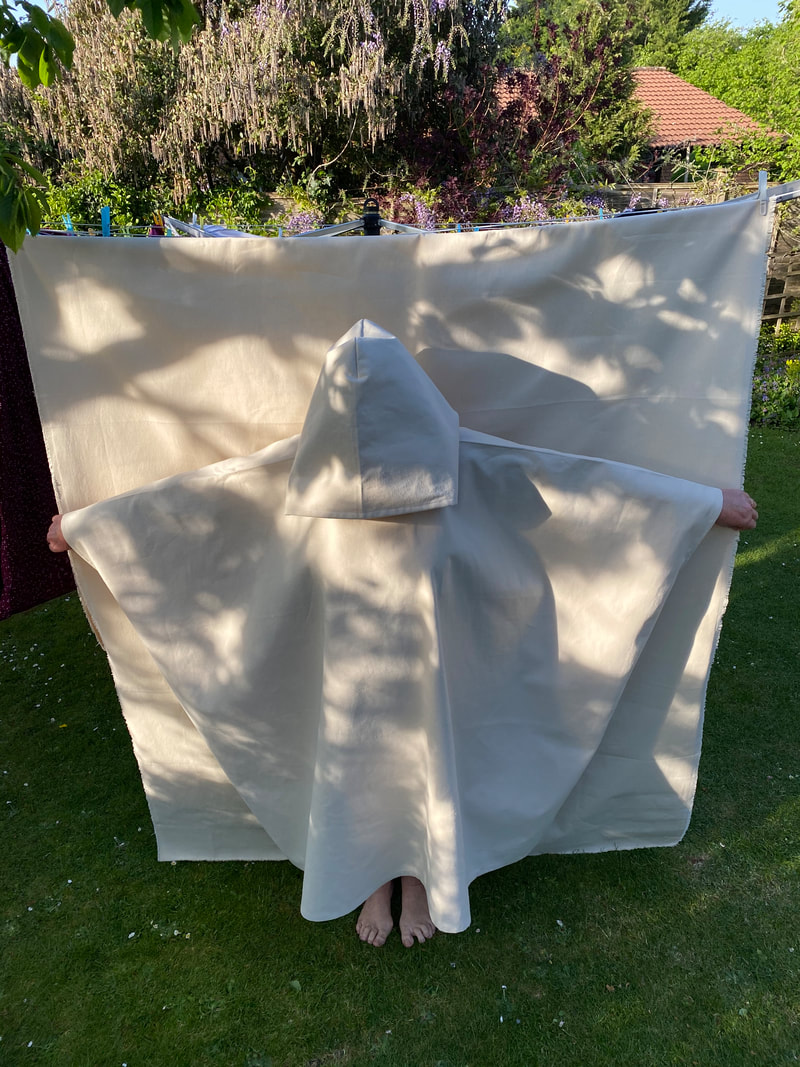 23.4.20 I then set up a second makeshift photo studio in the garden, using two tall clothing racks and a large roll of paper....
I was intrigued by the way the sculpture moved spontaneously when I put it on a hanger:
1.5.20 Hannah wearing it: 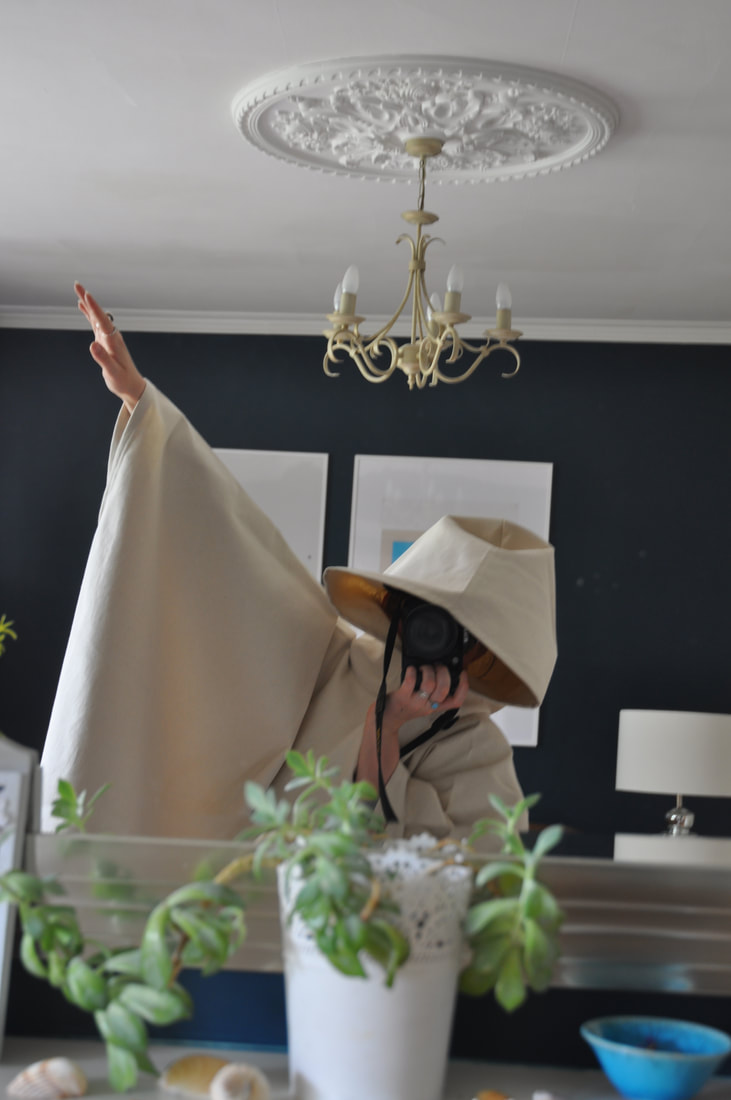