LOU BAKER MA FINE ART RESEARCH 2019 - 2021
Metal and knitting, MF003
7.9.20 Shoes or cast feet?
For my Undergraduate dissertation I researched the ways that second hand clothing can be used in art: Second skin: used clothing as representations of the body in the works of Louise Bourgeois and Christian Boltanski, so I know how powerful clothes and shoes can be in art. They have many very poignant and relevant associations for this body of work. They make us think of the body, and when they're empty, the absent body, and consequently loss and ultimately death. Used clothing, and in this case my shoes, are often marked, stained and scuffed, and the can become traces of wear and the wearer. They can obviously also change shape with wear and smell, especially maybe with well worn shoes. Discarded shoes also bring to mind the piles of shoes gathered in Nazi concentration camps and recently, for example, they were used as a poignant participatory pro migrant protest in Bristol. I have used them in an installation too, to great effect, see Don't wash your dirty laundry in public. They're also linked to identity, as with other clothes we choose to wear.

As a result of all these connotations, and others, I think that the shoes in these images are really interesting. I used them because the metal sculptures wouldn't stand independently, and I had designed them to fit into the feet I was casting, and I happened to have 3 pairs of my shoes, all black, in the studio, to use in different settings - in the metal and sculpture workshops and up a ladder! So, there was synchronicity about that. Without the cast feet, the metal sculptures are shorter than me too. I wanted them to represent me, and the shoes made them a little taller at least.

So, the metal sculptures stood in a selection of my shoes over the weeks that it took me to cast my feet and I kept wondering whether I should forget the idea of the complicated casting process and use shoes somehow instead.  In one tutorial, around that time, I remember, Robert was really drawn to them too. I wondered whether I could somehow secure the metal sculptures in the shoes, maybe with concrete?

They also bring a sense of the uncanny to the work, as my cast feet do. They too are substitutes for castrated body parts, so are maybe also more abject but conversely there's also more humour in them than in the feet. Using them would add a more playful and subversive element to something that is otherwise in danger of becoming rather serious!

During the crit with Andrea today, she liked the idea of using shoes. Could I add a pair of shoes still? I had decided to definitely use the feet as part of the final sculpture as they do have a presence (with a nod at the history of statuary and self portraiture), they're curiously appealing, yet abhorrent, (there's something very disquieting about casting my wrinkled aging, deformed feet), yet also something funny about it too. Another reason to use the cast feet is that they are part of the integral design so without them, the sculptures would be significantly shorter (than me.) Would that matter? I'm quite tall, so for most people these will be taller than them with the feet. With the shoes they would be more of a normal height for most people. The cast feet are also the result of newly acquired skills, time, physical labour and show a quite different relation to my body.

I think what I will do is use the feet for this assessment, as I now have only 2 1/2 days, but I will definitely take this idea further in the future. I might try and see if I can incorporate just one pair of shoes in the assemblage....with the cast feet wearing them. I have just the pair. More tomorrow! 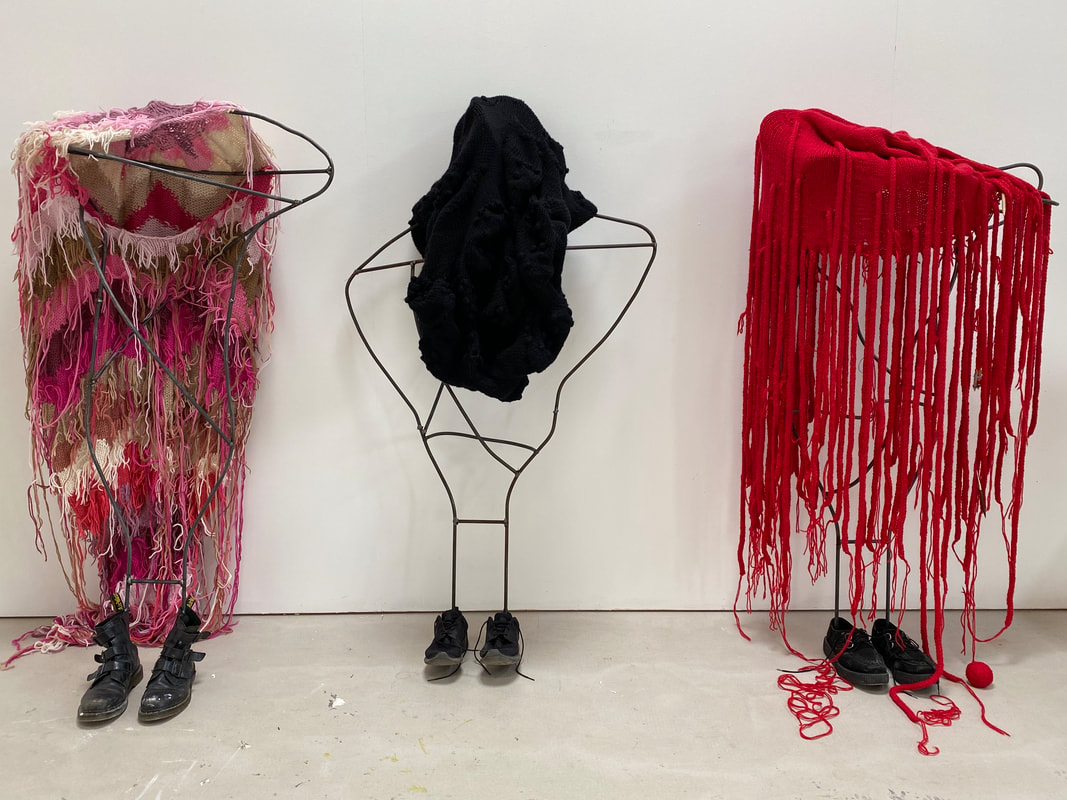 I'm hoping to cast my concrete feet this Friday, so I set up the metal sculptures today with a selection of my shoes! It's the first time I've set up the knitted pieces with the metal structures and I was pleased with the way they look. I decided that I want the metal to be visible, so I've draped the knitting over the metal, rather than covering them up. 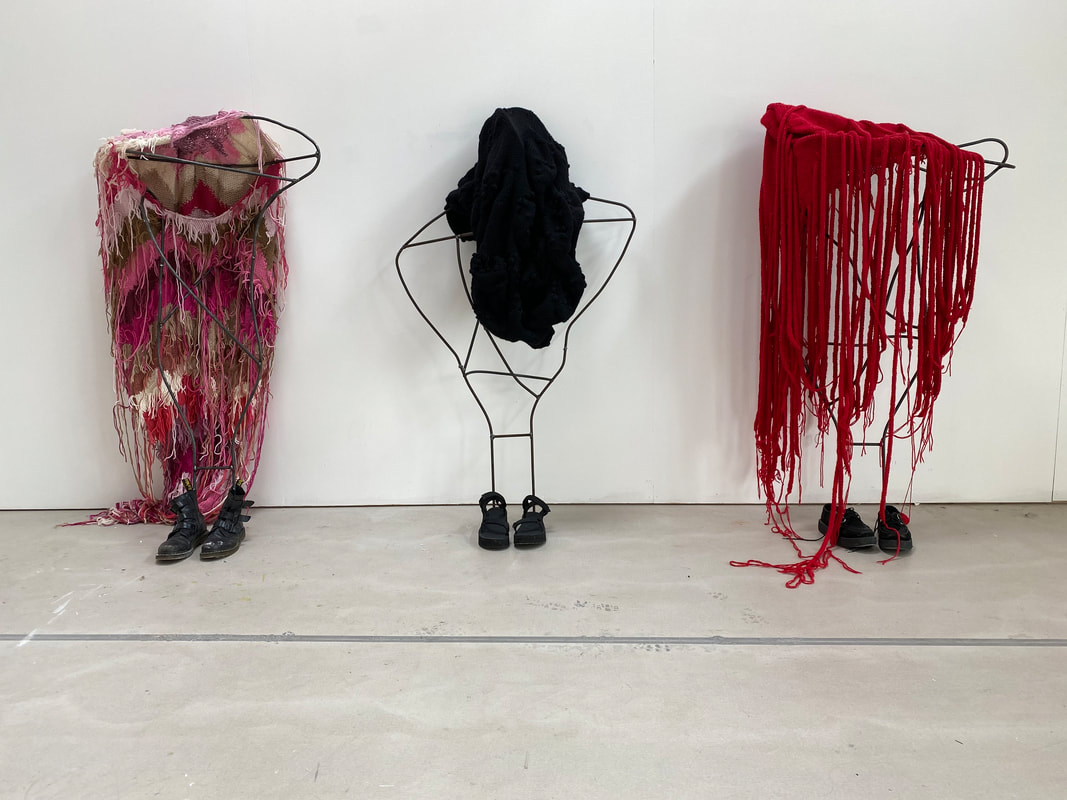