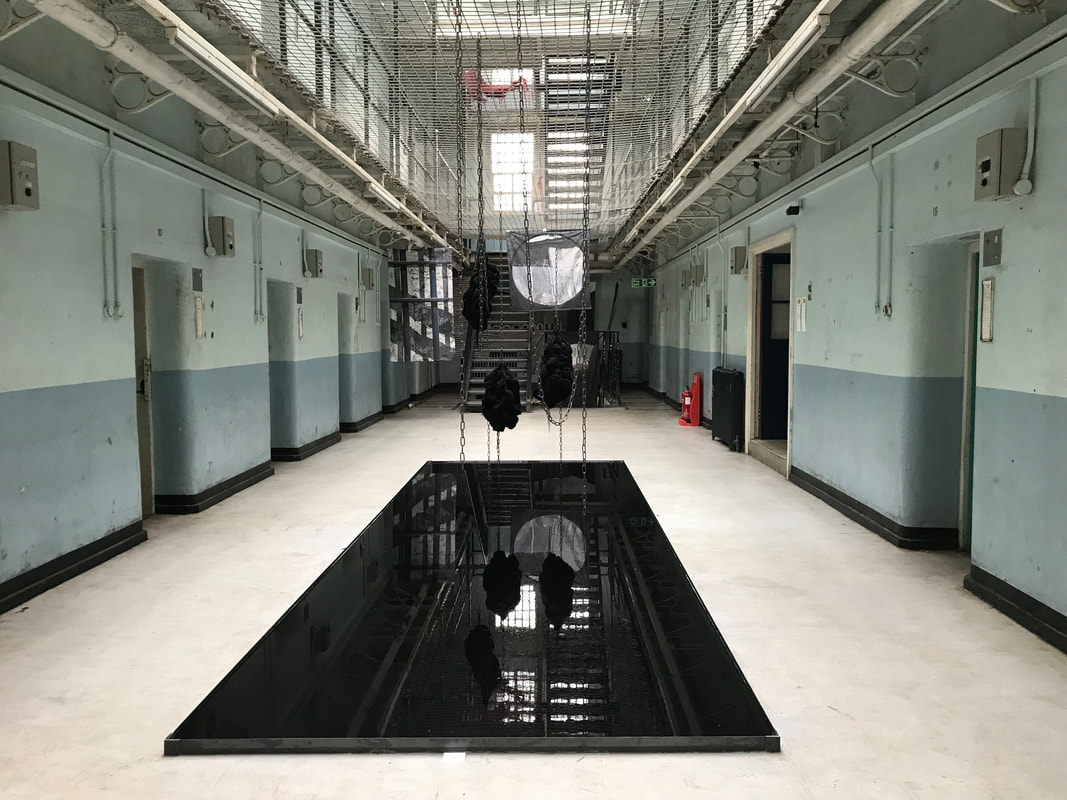 Scott Sandford and Lou Baker, 2019, IN.BRS.2019.39, installed at B-Wing
Thinking about B-Wing…
B-Wing is now, sadly, over. For the past couple of days - whilst I was ‘undrawing’ my red knitted installation, taking everything else down, loading, unloading, airing my work and finally beginning to sort everything out and put it away - I’ve been thinking a lot about site responsive art. If art is made in response to a specific site and set up there, what is the future of those pieces of art? Will the work that I have made for B-Wing be able to have a life elsewhere? Although it might be possible to arrange to install it in other decommissioned prisons, I’m not sure that’s what I want for it. 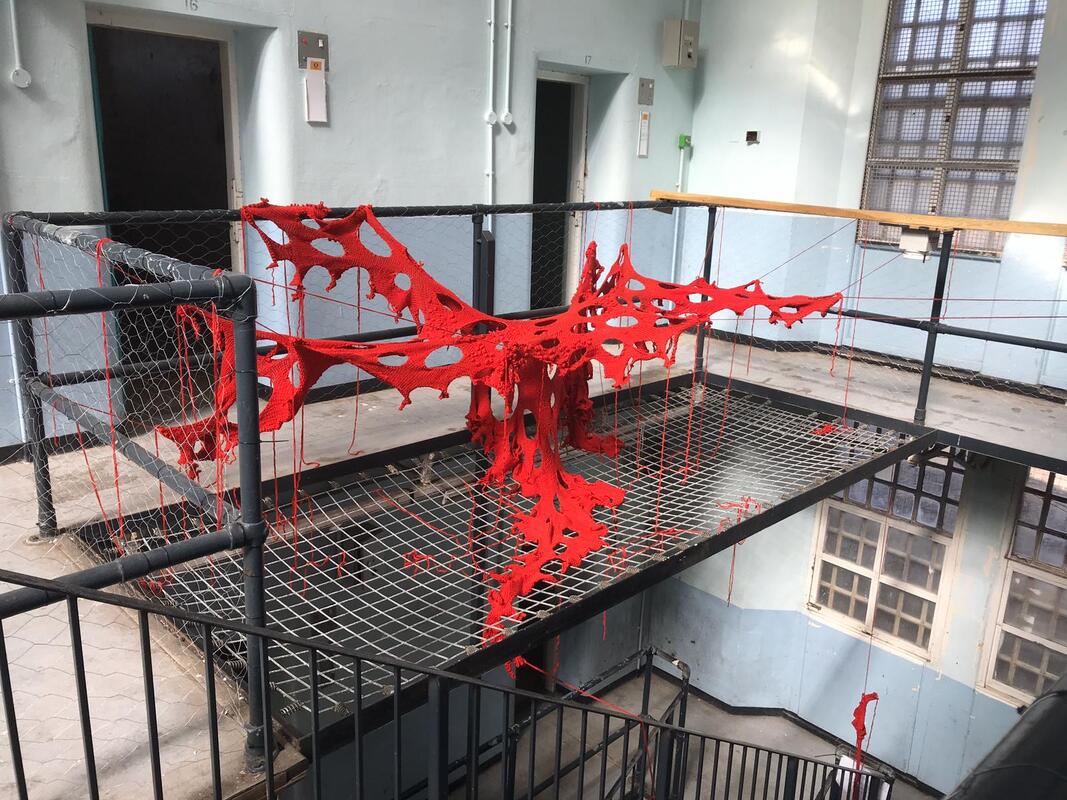 I feel that although this body of work has been made specifically in response to Shepton Mallet prison, all of it will be able to be successfully installed or exhibited elsewhere. It will be different in another setting, obviously, and will have different layers of meaning, but will still be autonomous. I’m looking forward to seeing where I can install it next!

It seems to me that there are different aspects to site responsiveness that need to be considered here. All of my work for B-Wing was made as a visualisation of my personal responses to the history and memory of one particular place, the wonderfully atmospheric, decommissioned Shepton Mallet prison. My red knitted installation creates links between the traces of the emotions that I imagine would have been felt, over the years, by the multitude of prisoners who have been incarcerated there; the Shadow sacks hanging over Scott Sandford’s dark pool or hovering in the slopping out room and the clothing installation communicate abjection. My wearable Living sculptures add a participatory element, which seemingly brings something more light-hearted to the space, but each one has also been made with very specific, and rather dark, ideas in mind; a strait jacket, physical traces, Frankenstein’s monster and a wearable shadow sack. All pertinent to a prison environment but definitely with potential for a wider context too. The Feedback cell is another iteration of an interactive installation which I have used before in several other settings, using different materials and themes to gather responses and to invite participation.

So, all my pieces made for B-Wing deal with subjects that are not solely confined to a prison setting, but they are highly relevant to it. Unquestionably, being installed in this context powerfully adds meaning to the work. The prison environment provides distinctive elements - the architecture, the beautiful decay, the dirt and debris, the changing light, the cold, the smell, the draft, the acoustics, the intimacy of the cells, the echoing desolation of the hall, history and memory - which will prompt in each visitor unique and visceral responses to the place, which will also have an impact on how the art is experienced.

However, although they may never be installed together again, I am certain that each of my pieces can and will have other lives elsewhere. I’m looking forward to seeing where I will have the opportunity to install them next and what added meanings there will be from each new environment.
Site responsiveness during installation
This is another aspect of B-Wing that has given me great pleasure. During the installation of each piece I was aware that I was responding to the physicality of the prison itself. As I set up the red knitted piece around the first floor, for example, it felt as if it became a spatial drawing as I connected the larger, sculptural forms with red thread. It was a stream of consciousness. I made intuitive decisions about how and where I would attach the wool. I had decided to only use attachments that were already there and soon discovered that each cell has its own identity; different layouts of furniture and fittings, placings of strange collections of hooks and nails, windows, light, smell and the marks on the walls; some had noticeboards, others tiles over the sink, some had lockable cupboards, some no cupboard at all. And then there were the other spaces, the shower room, the kitchen, the corridors and railings.
​
Although my intention with the red knitted pieces had been to visualise the common emotions that I imagined prisoners to have experienced during their incarcerations, it actually felt as if I were stitching the space, in the end, as if by connecting the knitted sculptures I was also making connections between the individuals who have lived here, somehow wrapping that first floor with the wool, maybe bringing some kind of retrospective comfort to those who had suffered there. It certainly felt peaceful.

I am very conscious that the ‘drawing with red wool’ was also a device to make a much larger installation than I could have made solely with the more sculptural pieces.

While I was setting it up I also started thinking about the Greek myth of Theseus and the Minotaur. He unravelled a ball of yarn as he entered the labyrinth to slay the monster and the yarn enabled him to find his way out. 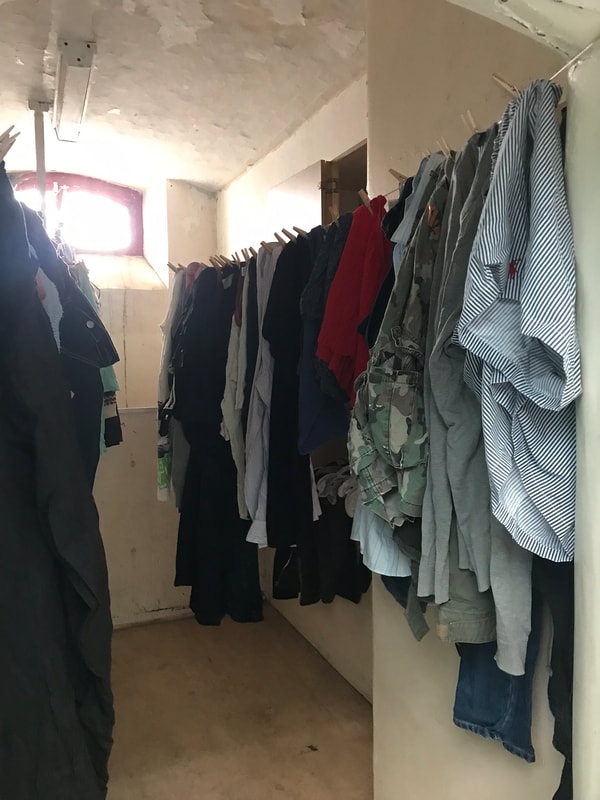 Lou Baker, 2019, The presence of absence, used clothing, shoes, washing line, pegs
With some of the other installations I responded to the physicality of the spaces in the same sort of way, so that, in many ways, the building led the installations:

Presence of absence, used clothing on washing lines:
Once again, I just used the fabric of the building to fix the washing lines. It meant that I had limited choices as the fixing had to be very robust so that the washing lines didn’t fall down once the clothes were on it. In the end I used the decorative brackets outside the door of the cell and the window latch to secure the washing line. I think it worked really well as it created a V shaped space, which felt very claustrophobic once the clothes were pegged on the lines.
I placed the shoes in a line under the bed and neatly folded some white shirts and put them in the cupboard, again, responding to the space. 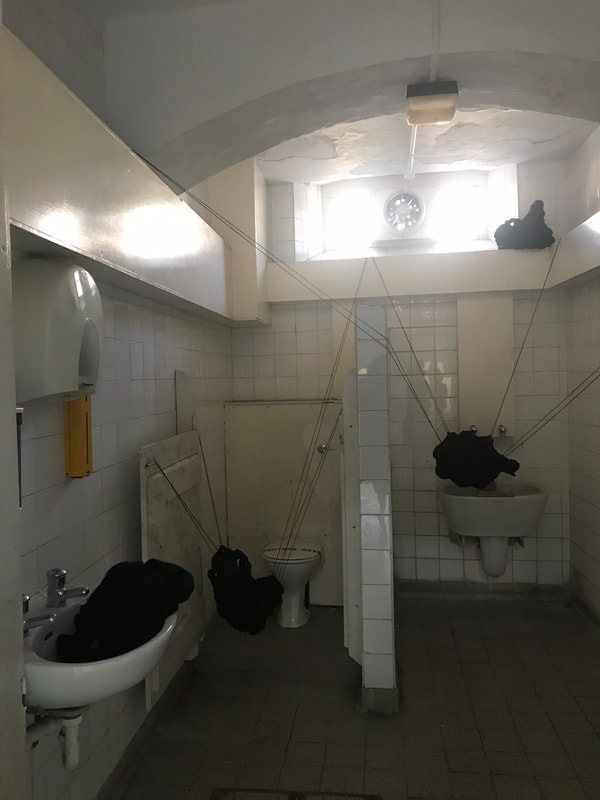 Lou Baker, 2019, Shadow sacks, in slopping out room at B-Wing
Shadow sacks, hovering in the Slopping out room: Although I did use some extra fixings, I responded to the different internal spaces again ‘stitching’ the sculptures into place so that they hovered and were framed by the different spaces -the toilet cubicle, the 2 sinks and that space behind the door.
Living sculptures: From the very first time I visited I envisaged a wearable sculpture hanging in each of the empty phone booths at the entrance. They bring an interesting public/private dimension and remind me of changing cubicles too. Although the booths look the same, in the end I had to devise different hanging methods for each sculpture as each was actually subtley different inside. Again, I enjoy the fact that the method of installation was determined by the space. 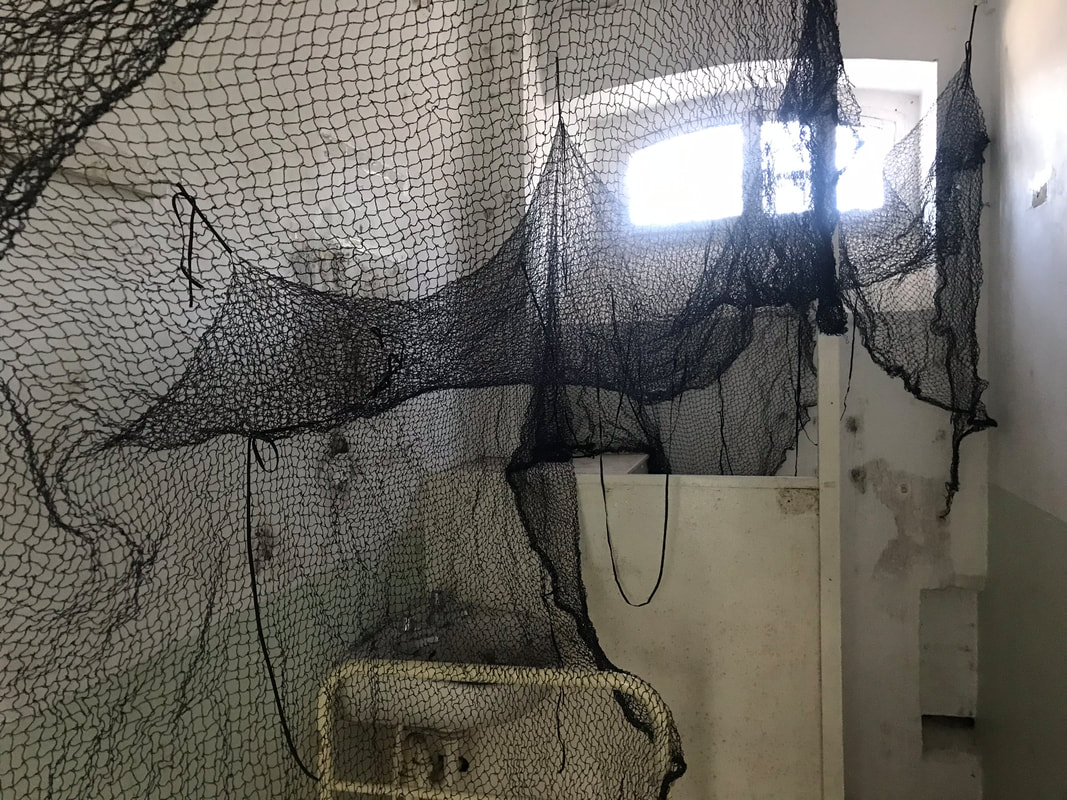 Lou Baker, 2019, Feedback cell, netting, elastic, installed at B-Wing
Feedback cell: I did add a few hooks to install this piece, but I was still responding to the space. It was quite like drawing in space with netting and elastic!
There’s so much more to think about but I’ll save that for other posts!
Interactivity and participatory art
Performance?
‘Do you mind if I write that down’
Temporality
Audience
Collaboration
What next?