LOU BAKER MA FINE ART RESEARCH 2019 - 2021
3. Summary of my methodologies for selecting and presenting my work for AR7007
Since May 2021 I have been developing my design ideas and making the individual parts for my final exhibition. I have trialled a number of assemblages  in the fabrication area, the studio and, latterly, in a large empty space on the ground floor of Locksbrook. This physical research has resulted in my final ensemble.
My initial intention was to construct 3 similar assemblages and set them in a row as a walk-through, tunnel-like installation. Each would frame a knitted sculpture (somehow) and consist of 2 concrete footprints supporting 2 upright steel rods, a jointed curved horizontal rod and jointed, arm-like sections attached to 2 lead hands. Here is an example: 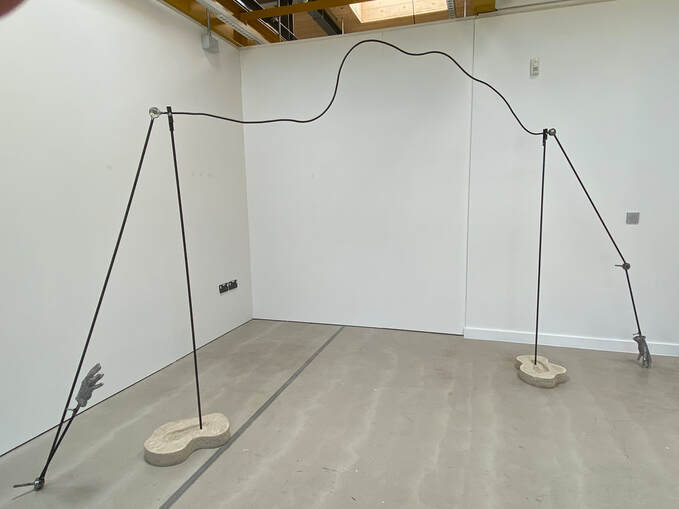 Trial assemblage in the studio, 22.7.21
I soon began to realise that that the assemblages would communicate my ideas more effectively if each were assembled differently and if they were deconstructed. I wanted to create an illusion of instability.

In the last few weeks, I have been trialling methods of ‘illusory world building’ (Anderson, 2020). It has been wonderful to have had a large space and plenty of time. It's clear to me that the work has become animated through these trials and practical research. This fits with what I've read about the interactions of the hand/body stimulating ideas (Wilson). It's almost as if the work (and I) need to move in order to make decisions. This certainly allies with Stern's notions of embodiment too. It enables me to make my ideas visible.

Consequently, I have been carefully considering the space, the way that the viewer is guided through it and how s/he will interact with it and become part of it. I had been referring to my work as an 'assemblage' but during this time I read Curtis' description of what she calls ensembles and I realised that this was my aspiration.

Here are images and some reflections about my selection and presentation of my trial assemblages in the space downstairs. I was delighted to be able to experiment with the illusion of precarity and install 3 assemblages for the first time with all the disparate parts together. I carefully considered how the sculptures were attached to the walls.. I also tried different ways to assemble the planned, joint-like connectors and tried other ways to join the parts together to give an impression of tension, balance and instability.

I also trialled including my cast concrete feet, which I made during the last module, MF7004, in addition to the more recent parts that I've made during AR7007. I decided that mixing all the castrated body parts, in different permutations for each assemblage, is the most effective visually, as it will make the viewer read it differently to find meaning, I hope. I also feel that it makes the whole experience more surreal and abject and accentuates the uncanniness. I feel that the presence of my carefully cast feet also plays with (and against) the naive 'squelched' appearance of the cartoon-like concrete footprints.

During my residence in the larger space downstairs, I made the PVC, zipped body bags to frame my knitted pieces. I had decided that by itself the knitting didn't inhabit enough space, in terms of the full installation. I made the first one, experimented with ways to install that and then adjusted certain design features for the other 2. I intentionally selected transparent PVC as a contrast in surface to the knitting, but also so that both the 'right' and 'wrong' sides of the knitting are visible. I used zips to reference clothing and the body, and also to reveal and conceal different parts of the sculpture. The zip also act as a resist so that the form of the sculpture changes as the zip is moved. I'm very pleased with the reflective surfaces, and the distorting (and distorted) ways that I've chosen to hang them. They are alien, abject, other.

I also considered carefully how much of the knitting would overflow, and how much would be contained, squashed, trapped. I decided to add long, 5m strands of yarn to the loose threads on the flesh coloured knitting and experimented with various ways to let it drape, overflow etc.  I also continued knitting the squashed entrails in the 3rd knitted body bag, changing the form of some of them to look even more like abstract body parts, stitching them back into the knitting to make loops. I feel this has been a successful resolution. 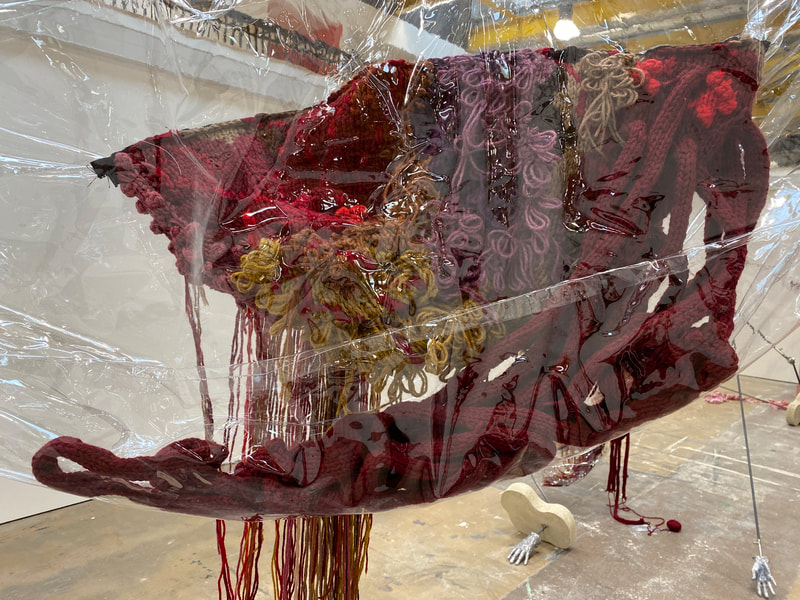 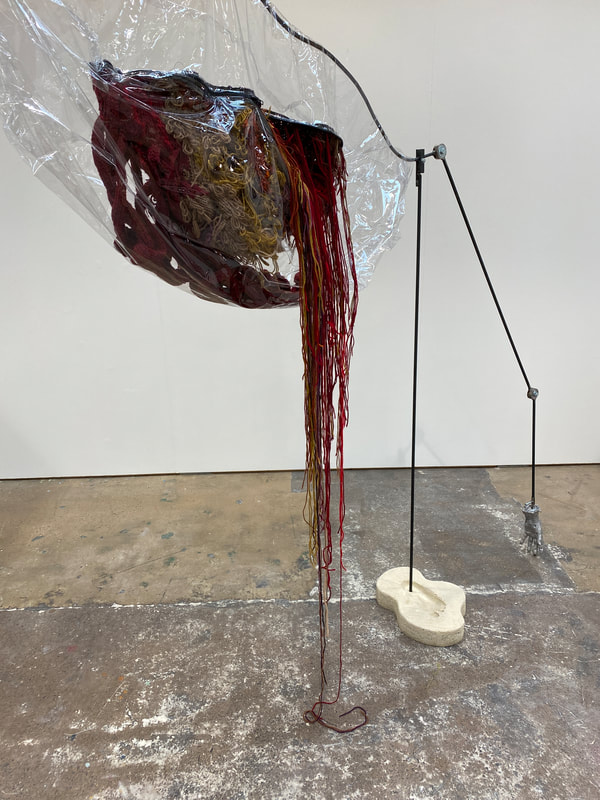 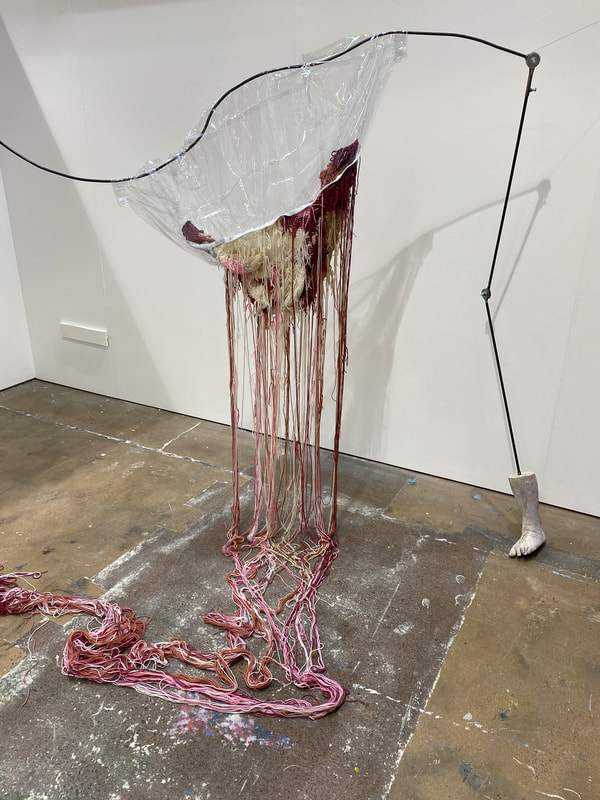 ​I did consider painting the walls - deep pink or burgundy - as Dexter had suggested this to make it feel more contemporary and less as if it's installed in an art school. However, I decided that colour might overwhelm the seeming fragility of the precarious forms. Also, Locksbrook has such an idiosyncratic aesthetic, that nothing will hide it. I felt it was better to leave the walls white. Maybe installing this ensemble one day in a derelict space could add to its meaning? I do, however, really appreciate the floor of this space. I feel that it works very well as a backdrop to my work.

Here is a video walkthrough of my final installation in the large space downstairs:
I do find that photographing and videoing my installations, the detail and the whole, helps me to see it differently. Maybe it's about becoming a little distanced from it? It was a privilege to be able to work with my sculptures in such a stunning space as it enabled me to give each assemblage room to breathe. Unfortunately, I know that limitations might not allow for this aspect of the work to be fully realised for the final assessment and for the Degree Show.

Moving into the smaller space in 112B upstairs has been an interesting development.

Although there is a very practical aspect to the modular nature of the exhibited works, in terms of transport and storage, I think there is a deeper significance in its versatility and site responsiveness. Almost everything is interchangeable and connects to almost everything else, which could potentially lead to an infinite number of variations in site responsive installation. Miwon Kwon (2002, p4) discusses the ‘impermanence and transience’ of art installed in response to ‘one site after another’. Tuttle ‘enters a dialogue with the space’ (Petersens, 2014, p77), sometimes reinstalling his work to explore how it can respond differently to the same setting. Much of my work deals in multiples. It’s like 3D collage. It’s fragmented, deconstructed, changeable, precarious, unravelling; balanced between form and formlessness.

During a tutorial with Andrea, she suggested that I set up 2 of the assemblages precisely as they were downstairs for my final exhibition:
3.9.21, Ensemble 1 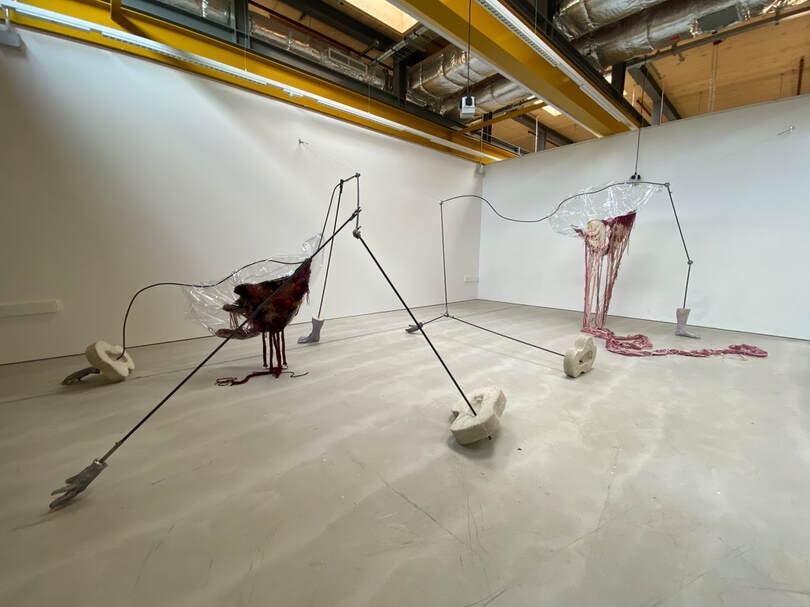 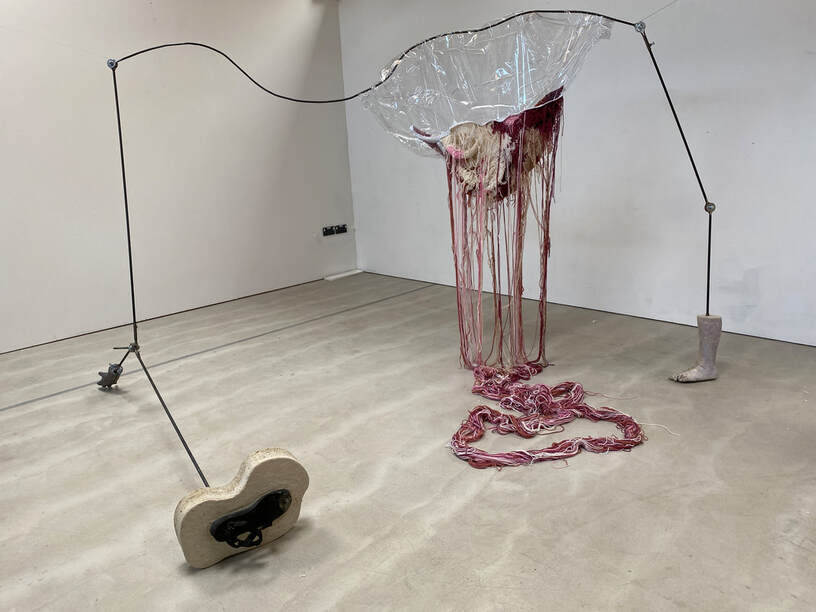 As I'm sharing a space with Amy and Fran, who both have projections, we've blocked the large windows so the room now has very low light. I like this, and I feel that it adds something and makes my work even more atmospheric, but I'm also conscious that, for the Degree Show especially, my work will need to be illuminated somehow at night. Consequently, I tried out various lighting sources - spotlights, work lights and the dimmable lights in the room.

​I was interested in the way the spotlights threw shadows of the PVC bags, but I wasn't convinced that the shadows added anything. In fact, during the crit, Robert said that he thought it made the piece too theatrical. I agree. The lights themselves were very inflexible as well, so maybe I'll explore lighting each body bag from above after the assessment. The other light sources also didn't add anything. It was useful to try though and has given me ideas of projecting through plastic....
During my last tutorial with Andrea we discussed adding one of my shoes, as I had last year in Parts of me, 2020. I subsequently made a new concrete footprint, but this time embedded one of my sandals in it, in fact, one of the sandals from last year's submission. Today I added that to the second assemblage, but wasn't happy with it.
7.9.21, Rearranging the flesh coloured long strands 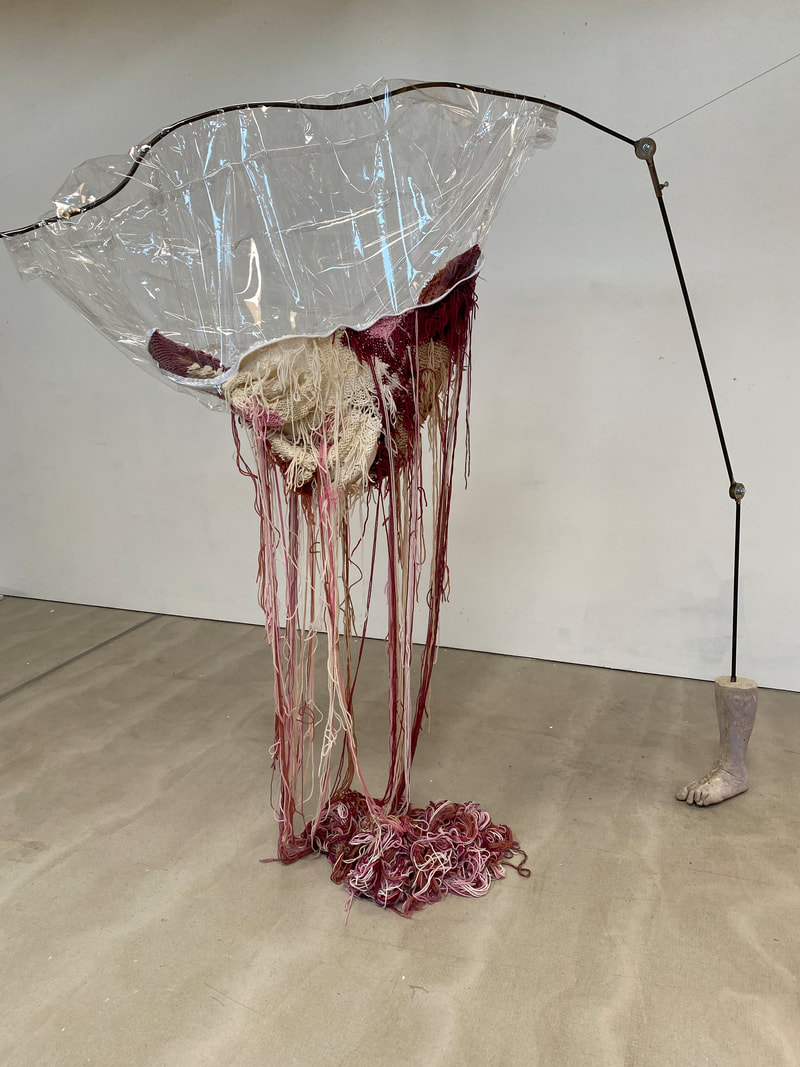 As a result of the crit., I finally decided to let the extended flesh coloured strands fall in place, tangled by chance rather than deliberately placed by me. I feel that it makes it look less like a stereotypical 'textile' installation.
I wasn't happy with the lurking body bag as it felt too disconnected and unseen. I deliberated overnight after the crit. and then I added the third assemblage, further deconstructed,  suspending the curved metal piece above head height, so that it invites the viewer to step into the space by the pillar. I especially like the way that the curved metal mirrors the curve on the assemblage in front of it, and that the viewer can walk under the knitting and has to look up to examine it. 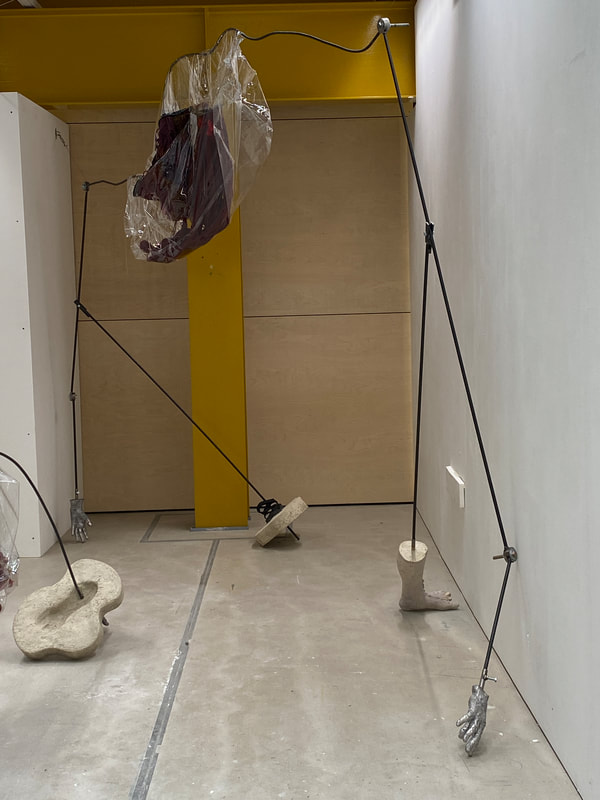 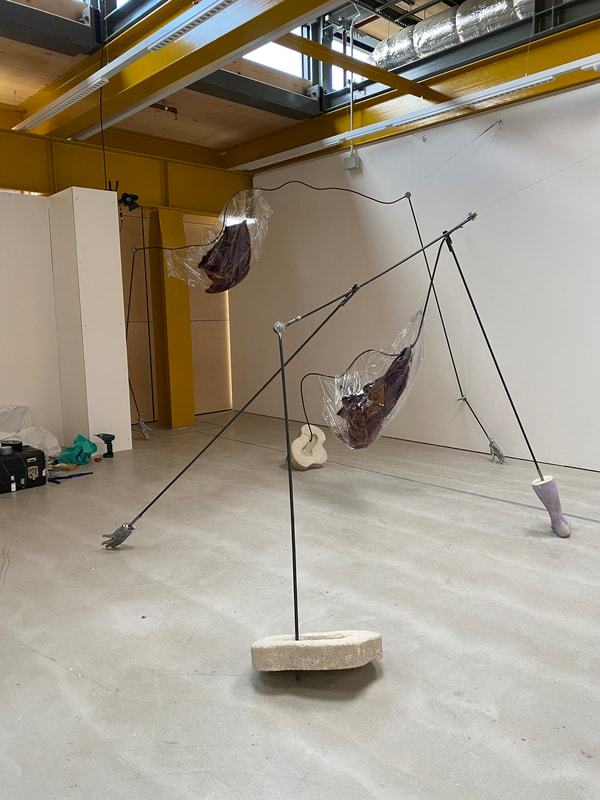 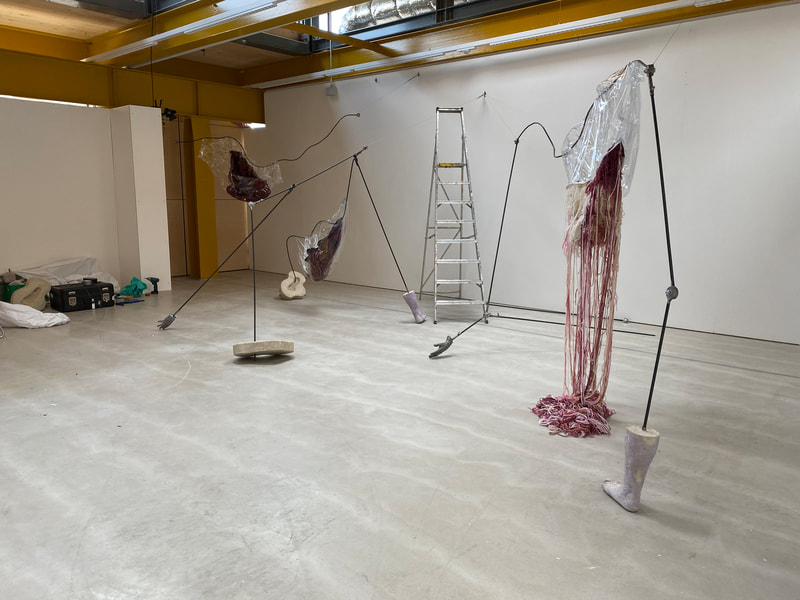 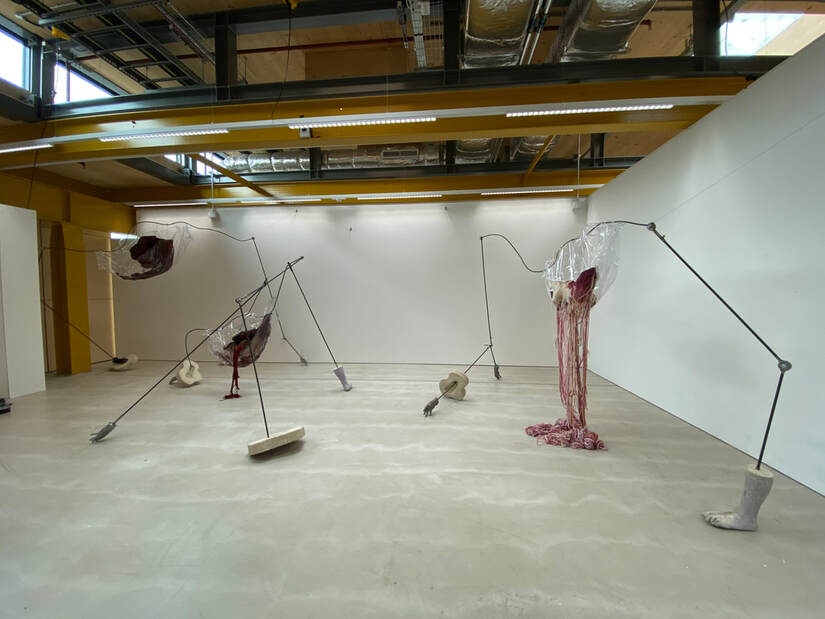 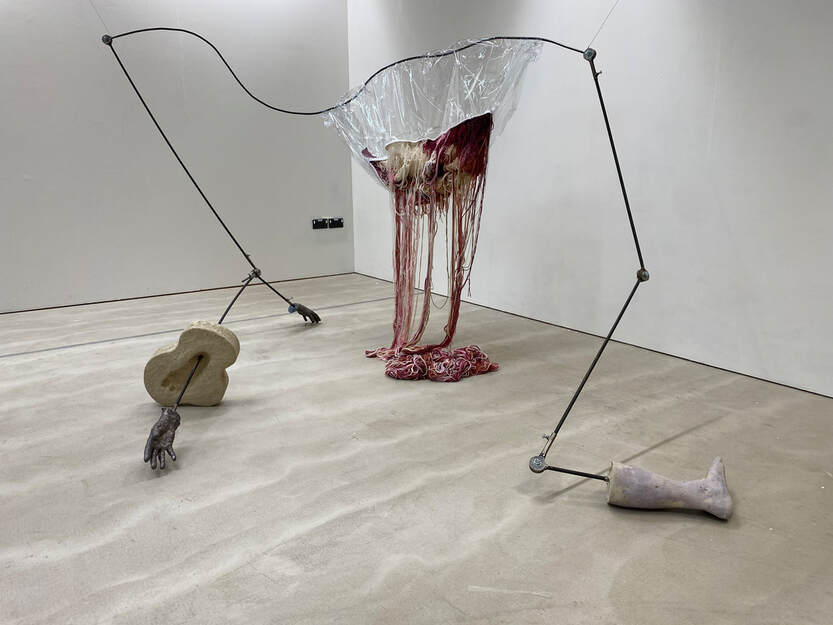 Another night of deliberation, and today I decided to deconstruct the 1st assemblage further, to make it look much more precarious. This meant I had to choose between making it possible to walk through or making it look as if it was about to collapse. I opted for the latter, as I feel that already the placing of the sculptures enables the viewer to experience it in the round and that that making precarity visible in this way makes the ensemble more powerful.

​I also decided to drill through the top of the sandal so that I could turn the concrete piece around. I have added a second shoe as well, to one of the cast concrete feet and included them both in the third assemblage. I feel this works well, and adds a little macabre humour.

The extra veiling was for practical purposes as we were sanding and painting the walls, but it gives me ideas.... of course!